More often than not, Sunday night is Pizza Night at my house.

It took me forever to figure out how to make a thin crust pizza at home. I practiced stretching the dough for months. First I tried to roll out the dough onto a pizza stone. That did not work. Then I purchased a non-stick 16″pizza tray with holes in it which was perfect, but it still took me awhile to get the process down. There were a lot of misshapen hole filled crusts that I would have to peel off of the pizza tray and  wad up in a ball for another go around. Below is my step-by-step procedure for getting the dough almost paper thin. I also posted an IPhone video below my husband Jason made of me that illustrates the whole procedure.

How to Make the Crust Thin & Crispy

1. I’ve tried several recipes for pizza dough and purchased a bunch of different store-bought pre-made varieties. I’ve found that Trader Joe’s whole wheat pizza dough works best. Plus, heck, it’s pre-made, whole wheat and tastes great, so I don’t even bother with a dough recipe anymore.
2. Stretch the dough right out of the refrigerator. DO NOT let it sit out at room temperature and rise. If you want to let rise, do it after the stretching.
3. Spray a non-stick pizza pan with a bit of canola oil or olive oil spray.
4. Dust the pan lightly with corn meal. This helps prevent the dough from sticking.
5. Plop the dough onto the pan. The Trader Joe’s dough comes out flat and kind of square from the packaging which is perfect.
6. Pre-heat the oven to 485 degrees. The thin dough combined with higher heat is what makes the crust more like a cracker.
7. Wet a rolling pin with a little bit of water.
8. Roll out the dough. After each roll, turn the pan a quarter turn and roll again to even it out on the pan.
9. Slightly wet your hands. Pick up one corner of the dough and gently pull it to stretch it towards the side of the pan.
10. Rotate the pan to the opposite side and stretch again.
11. Rotate the pan one-quarter turn and repeat.
12. Keep repeating until the dough is evenly stretched over the sides of the pan. There will be a lot of extra dough over the sides. Don’t worry about that. You’ll cut it off at the end.
13. This may take a bit of practice, so don’t give up! It totally worth it to have a lovely thin crust pizza that you made yourself.

After you’ve got the dough stretched. top with sauce and your favorite toppings. Then cut off the extra dough with a scissors. I like to wrap a little back over the edges. 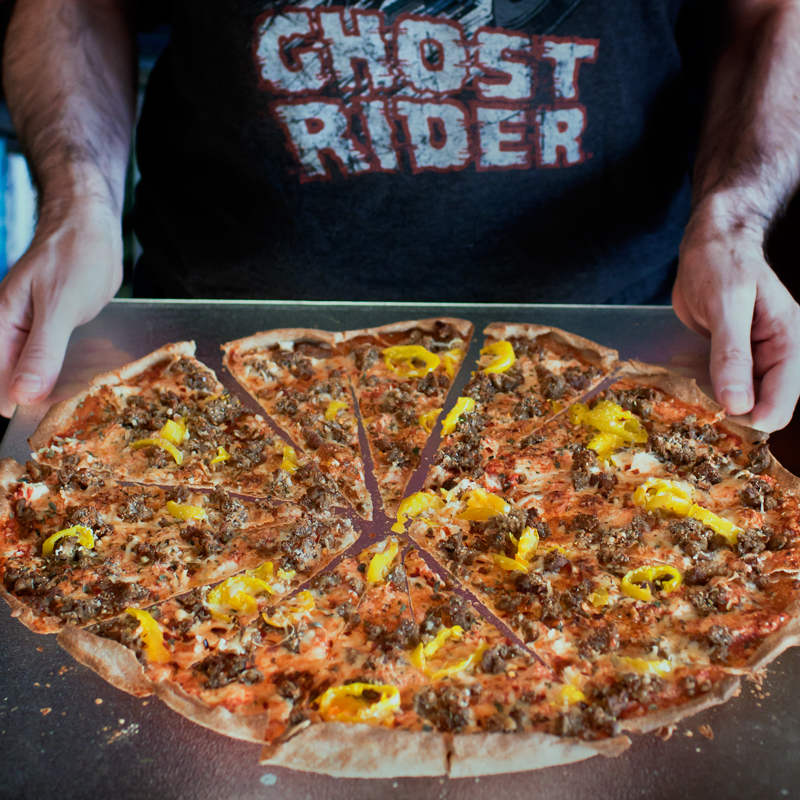 Once the dough is stretched sprinkle it with the onion flakes and Oregano. Spread the sauce evenly on top. Cook the patties in the microwave so that they are defrosted but not hot. Mine takes 44 seconds. Squish the fennel into the sausages (you can see how in the video) and spread evenly over pizza. Spread the other ingredients on top and cook for about 15 minutes or until golden brown and not mushy in the middle.

Wednesday night pizza is a lot more free-form. I use the left over dough to experiment with different toppings. For this one I mixed 2T of non-fat ricotta cheese in with some extra sauce. I topped Jason’s half with three strips of Morningstar Farms veggie Bacon. My half has anchovies. Both sides were then topped with grated and then shredded Parmesan cheese. 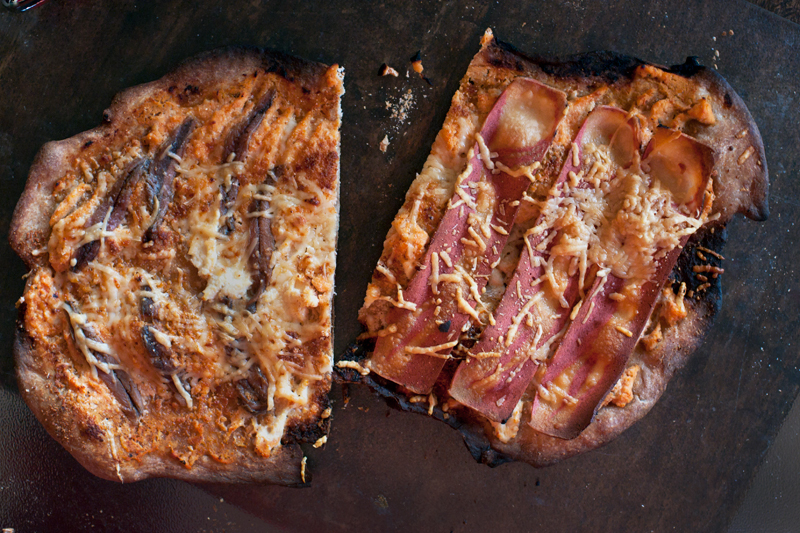 Here’s The Video of the Whole Process.

In my latest article for the Food Network I give step-by step instructions with photos on how to make individual ice rings to cool down and brighten up summer drinks. They are easy enough to make for […]

These easy candied apples are a healthy, sweet treat that are fun for kids to make. I used Lady Apples, which are stunning, tiny, sweet apples that resemble crab apples. Also called Christmas Apples, they […]

Sometimes in the morning when I want a little treat, I drive down the street to my favorite coffee shop where they make the most amazing quiche. I’ve been doing it so much lately that […]

Sonoran Hot Dogs for Memorial Day! Recipe's in my

This is the spicy, Tucson Sonoran style potato sal

The recipe for Vegan Chile Colorado is on Jackie's

I had no idea this was happening. Taste of Tucson:

Thrilled to be talking about the history and regio

Cinco de Mayo is quickly approaching and you are g

Eat My Words is a new podcast from @azhighways hos

A recipe from Taste of Tucson by star chef @suzann

I am thrilled, I am honored, and I am very gratefu

I have published a comprehensive, free resource gu

This image of dried Anaheim chiles that I photogra

Here's one of the cute Easter cake recipes that I

These matzoh tostadas are crispy and crunchy and l

This was a dream come true! I was on @npr via @kj

Had Noodleholics’ Chaoshou dumplings while watch

Here’s a different kind of pancake for National

All photography and written text on this site  2010-2021 ©Jackie Alpers unless otherwise noted. Material may not be duplicated, published or re-written without permission. All rights reserved. View Our Privacy Policy